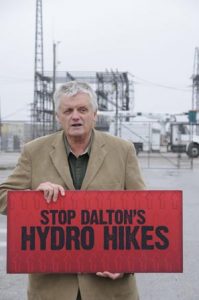 At a news conference yesterday, Barrett warned that as of May 1st electricity will go up again. Dalton McGuinty promised he would only raise electricity bills by one per cent — he has now admitted they will skyrocket by 46 per cent.

The Canadian Manufacturers and Exporters Association project the average family’s electricity bill will increase by $732 per year by 2015.

“We will put an end to signing massive subsidies of 80.2 cents per kilowatt hour when the market price is just five cents,” said Barrett. “We will pull the plug on Dalton McGuinty’s smart meter tax machines.”

Barrett went on to say that Tim Hudak and the Ontario PC Caucus will put consumers first – both families and businesses – and respect that they pay the bills.

By submitting this form you will receive our newsletters and e-mail updates.